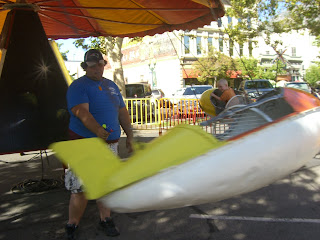 Nathan and Zach went to the BYU/ WA football game which left Kirsten and Caleb feeling left out. Luckily there was the fair in Provo. I didn't know it was the "latino" fair till we got there and I felt like the minority for the first time in my life. I let the kids choose one right to go on. Caleb chose the planes and the attendant was really nice and let him ride for a long time. He would spray him with a water bottle as he went around, which Caleb thought was great because it was a really hot evening. 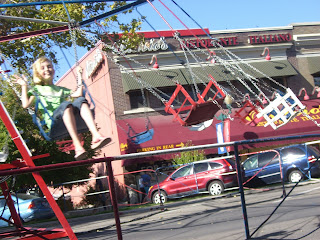 Kirsten chose the swings and was the only person on the ride! She felt pretty special. We then had to get the elephant ears as I call them. They were good, but I haven't found any yet that compare to the ones at the fairs in Washington.
Posted by kathryn at 4:07 PM

I think we remember them being better than they really are because I haven't found anything close either.