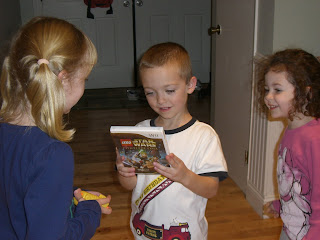 (Zach has been asking for the Wii Star wars lego game and we finally got it for him)
We drove all night wednesday the 24th of Novemeber to San Jose, CA to the Macias' for Thanksgiving and arrived a little after 5am. The kids were rested, Nathan and I weren't. The cousins loved being together. While we tried to recoop the kids played during the day. Later in the evening we broke out the presents, cake, ice cream and the surprise tickets from Vickie and Mike Macias to the Sharks Hockey game. 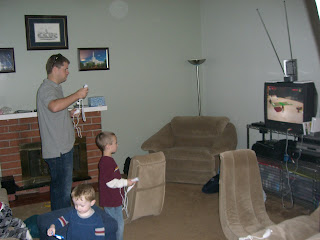 Adam Epson and Zach trying out the new Wii game! Zach was delighted that someone liked the wii as much as himself. 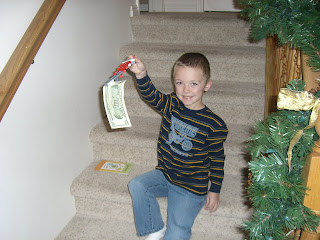 Zach we more presents from GG& G Gale ($ for savings) and the building lego gripper that Zach made out of G & G Stitt's present. Thanks everyone for celebrating the birthday of our Zachary Michael Stitt. 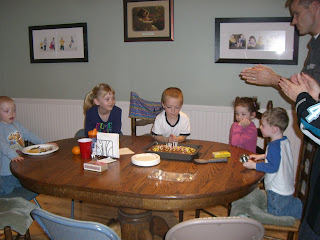 Here it is time to blow out the cake. Zach had to blow them out fast because there were lots of willling helpers. I told Zach that since we were traveling he would get to go pick out a cake at the store...Zach wanted me to bake his cake at home. So Aunt Lisa picked us up a mix (thank you) and he got to spread the sprinkles on his home cooked cake. 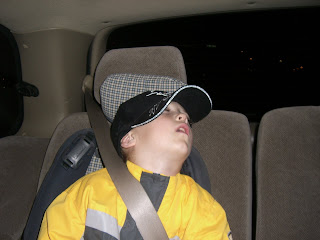 I guess I was mistaken when I said that the kids were rested. On the way to the game with Mike and Vickie Macias, Dad, Kirsten, Caleb, Zach, Uncle Chris, Adam Epson, and Jessie...most of the kids took a snooze. 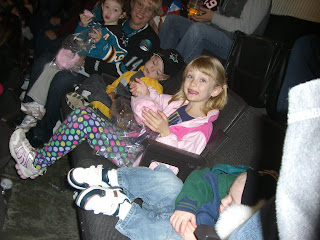 Once at the game both Zach and Caleb bit the dust again to sleep! Kirsten, Vickie, and Jessie are still hanging in there. All the kids had a blast! Thanks Vickie and Mike! 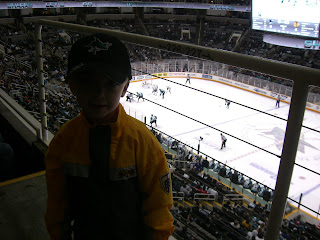 Zach in a pose at the Sharks game! 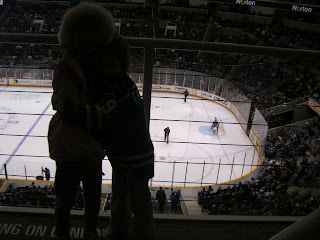 The inseparable cousins, Kirsten and Jessie!
Posted by kathryn at 4:53 PM