January going out with a whoosh! 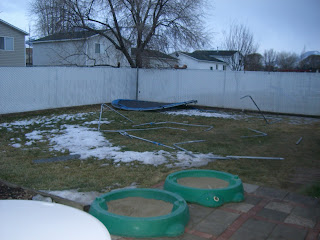 The end of January brought with it a great wind storm with winds at 72miles per hour. I had just put the kids to bed when I heard things start to bang around outside. My first thought was "Allie, our dog is outside." I decided to go out and bring her in. She was running around and was more than happy to come in the garage. When I got her in, I foolishly went out again to grab the sandbox lids to put them under the playhouse, but while going to get one the other flew up and hit the back of my leg...it hurt like the dickens, but didn't look that bad that night...the next morning though it looked pretty scary. (the photos below.) I stopped trying to gather the odds and end then around the yard and went to the shed to get allie's kennel. The door was caving in because of the wind pressure and I had to pull really hard outward to get it open. It was like a live nightmare when I got the one door open the whole roof of the shed lifted up and was propelled backwards, up and over the fence and into the neighbors house...cracking their siding. I was a little shaken up and then decided to just get to work and started making my way against the wind to bring some pieces into the garage. The pieces were like big sails that just pushed me back the little I'd come. After getting one piece in the garage, I realized that his was a futile attempt and grabbed the kennel next (I wouldn't have even got the kennel, but to leave allie in the garage with free rein wouldn' t be adviced. She doesn't chew on as many things, but she does get creative in her exploration.) Just my luck the kennel that was so convient for storing because it could collapse, now wouldn't open. I gave up and called my ever helpful neighbor, Cody. He came over and helped me secure the fence with twine since the fence latch broke off when the find caught it, helped me dimantle the remaining pieces of the tramp that were swinging toward the house and windows, and successfully set up allie's kennel so I could go in the house with the first reason I went out in the first place accomplished. I felt sick as I listened to the wind wrip away our shingles on the roof, but there was nothing I could do. When Nathan got home, he wanted to go out and see the damage, but again there was nothing that he could do either which mad it all the more frustrating. The wind stayed strong until about 1am, and we finally were able to try to sleep. We took pics the next morning. 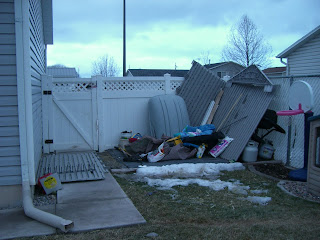 The wind storm blew off alot more shingles than we originally thought. Nathan came home earlier from work on Friday to try and replace the missing pieces, but the next snow storm and night came upon us unprepared. We figured the exposed paper would last for a little bit. When the next day saturday found snow on the roof, Nathan brushed off the snow with a broom and we went up to start the process of repairing. Our neighbors helped watch the kids so we could both work and even our Bishop came over to help. I felt awful for taking the Bishop away from his family, but really appreciated what he accomplish on the repair allowing us to at least cover bare spot with the shingles and nails and then later to glue them all down. Another lesson I learned: I'm not cut out to be a roofer and I'm really out of shape when using a hammor for about 4.5 hours makes me sore. 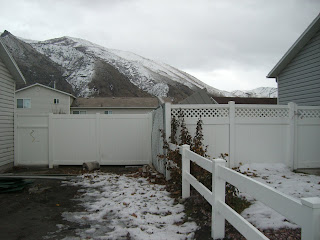 The shed roof went over our fence and into the house on the left. 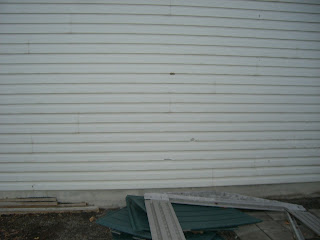 Two holes were created as the roof and the metal support beam went slamming into the siding. 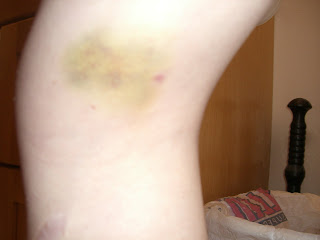 The bruise that I deserved for being stupid enough to go out into a wind storm. The night of the storm only the pink dot was there...the next morning I felt a little more justified that it hurt so much when the color started forming the bruise. Lesson Learned: stay out of wind storms...the dog is find in her dog house. The tramp was a complete loss as the frame was bend beyong what we could try to jimmy and the shed...we'll try to reassemble after the weather gets warmer and we can find longer screws that can reattatch where the existing ones were wripped out. With a little luck we could hammer out the bend in the support frame! Wish us luck with that fun project.
Posted by kathryn at 10:40 AM

That's crazy!!! I'm glad you only ended up with a bruise, silly girl! Good luck with recovering from that...