Sledding over the break! 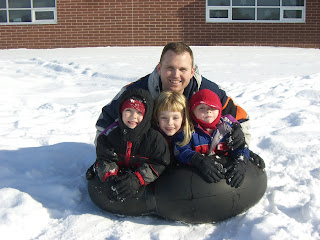 On the saturday after Christmas, we decided it was about time we took the kids sledding. It was one of the warmer days so we didn't have any excuses left. We found the perfect place at one of the elementary schools, (Cherry Creek, I think) We had seen the hill when Zach was playing soccer this year and thought it was steep enough, but not too steep and maybe not as discovered as the Rock Canyon Park is in Provo, where it is too populated and down right scarry for being too icey and steep and watch out for your life dodging people. 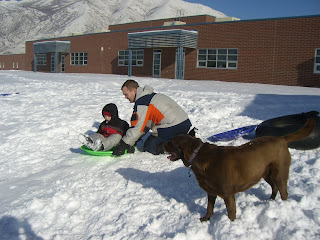 After being there awhile, I left to go get Allie, our lab and more sleds. The kids and Nathan had made a jump at the bottom of the slope. We were trying it out. Check out the movie at the bottom. I only seemed to video when there were wipeouts, but they really did have fun. 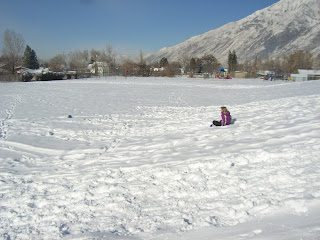 After the jump was made, Kirsten decided to make her own flat path. 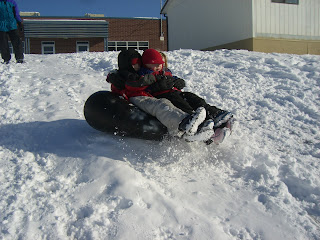 The kids going down the slope on the tube. Yes, Gale's these are some of the same ones we used when we were growing up. I inherited them when Lisa moved to the snowless California State. Sadly, only one is still functional. 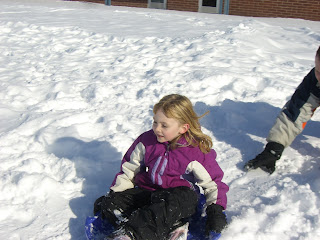 Kirsten getting a helpful push down the slope. We found the little plastic disks from walmart works great. 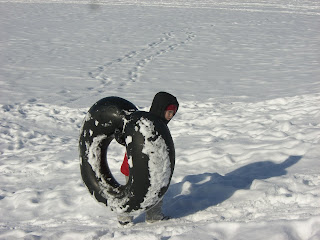 Zach heading back up for more. He is getting so big, last year he couldn't even carry this tube. Notice the bend in the tube...we love our handy dandy duck tape. It was the last straw for this tube. 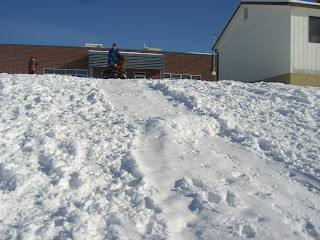 I tried a number of times to get Allie to go down with me on the disk, but she didn't want to sit still long enough. After that she would attack us with slobber when we were trying to get positioned before take off. She had a blast. 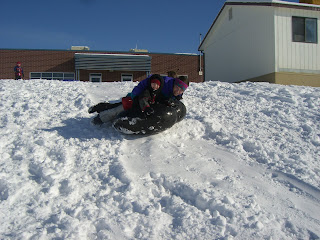 Zach and I speeding down the hill after a run and jump style mounting. 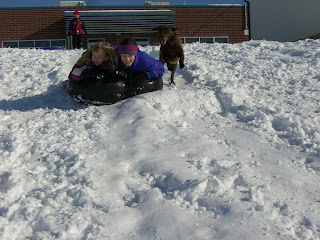 Kirsten and me with the same technique, but with allie attempting to catch up with us on the way down. 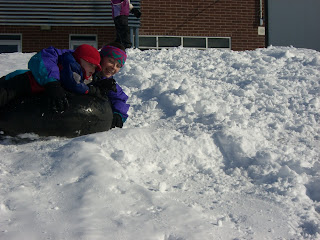 Calbe and I taking it head first...watch out here comes the jump! Granted it doesn't look like much of a jump...but it could give you some air action! 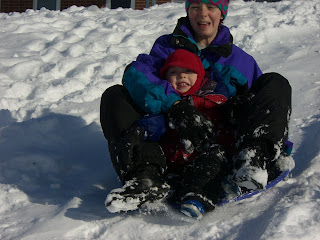 Caleb and I taking a different mode of transport down the slope. Those disks go fast, but oh they are getting tinnier every year. 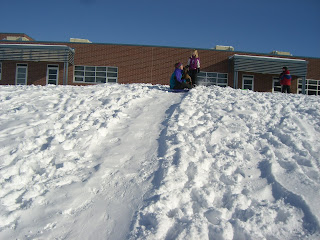 Here I'm trying to get allie to go on the disk with me. She sat for a minute, but jumped off on the way down giving me much love for my attempt. I hate slobbery kisses. 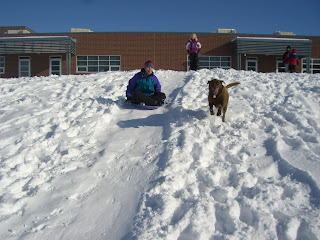 Here allie is beating me to the bottom on our attempted dog and woman ride together. 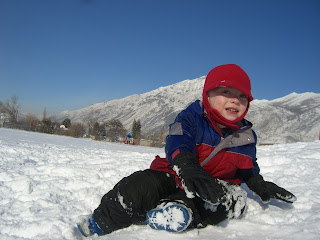 At the beginging,Caleb would ride to the bottom and then fall off and dust off his boots of snow...he tried in a failed attempt to keep his boots clean. 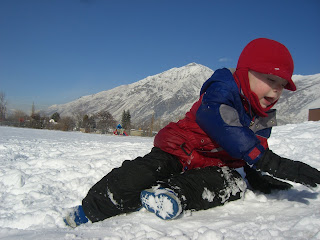 I just loved these pictures of him. He is getting so big and trying to fit in with the bigger kids. He was a trooper after all of his spills, he didn't even complain that he was soaking wet only when he face planted and his sister and brother landed on top of him. What a tough guy! 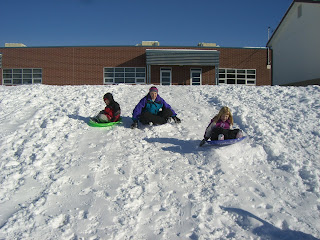 We made more tracks and then had a race to the bottom. 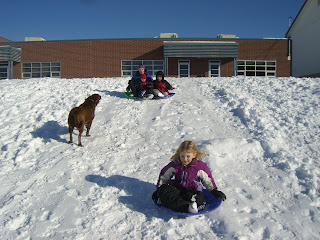 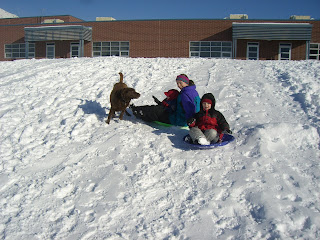 Look at Caleb, he is riding with me and trying to fend off allie from her kissing advances. 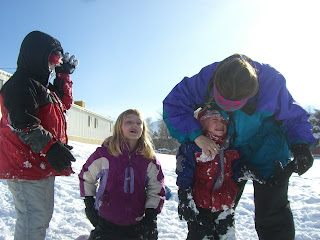 The wipe out, I was talking about earlier. Poor little guy! 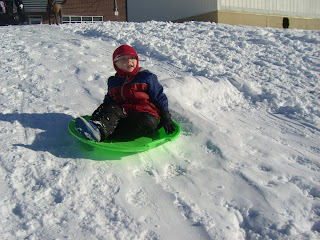 It took alot of convincing to get him to go down the slope again by himself. When he started to tip over he would let go from the disk and then tumble out. We had to remind him to keep holding on with two hands so he could stay balanced. He had alot more fun when he stayed on for the whole ride. 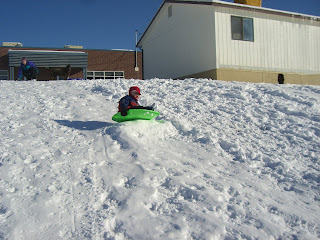 Hitting the bump and staying on... 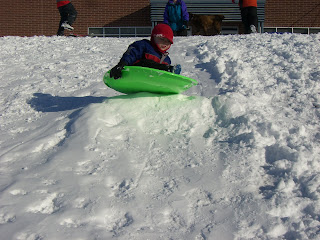 Almost over and still hanging on... 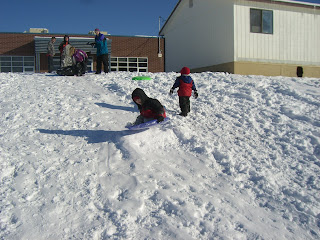 We were having so much fun; we attracted attention from the neighbor kids and invited them to come try it out. 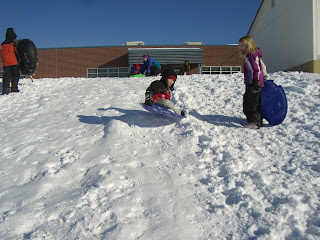 Zach trying to keep his balance on the jump. 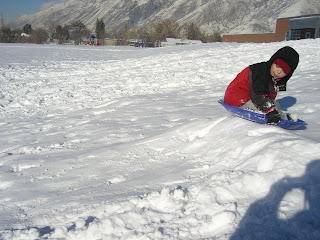 Hitting is going backwards was a little bit scary, but this little dare devil just held on. 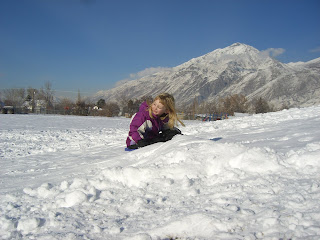 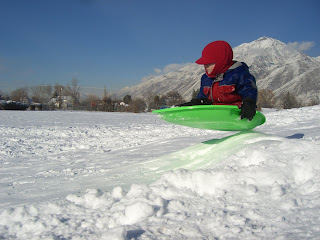 Caleb getting some air and still he has two hands...he's learning by trial and error. 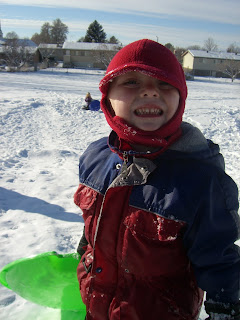 Here he is proud that he made it down with now wipe outs and is headed back for more. Look at that proud smile.

Wow, that does look like a fun place to sled...maybe next time we can go too..