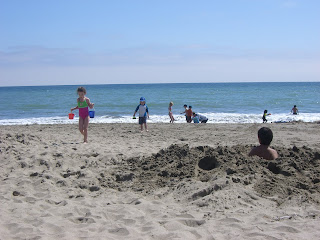 It was a beautiful friday afternoon, when we headed out to go to the beach. The water was a little chilly, but the kids didn't seem to mind as they made trips with full buckets of water back to our stake out place to make sand castles. Notice the boys head sticking out of the hole on the right of the screen. This was a huge pit that these kids made. We got to enjoy their labors later after they left. Watch the video at the end. 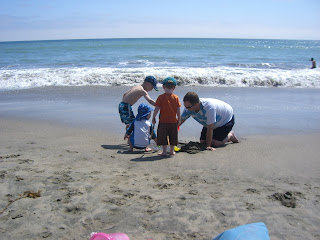 The boys were up closer to the water making their own hole to capture the waves as they left some water behind. 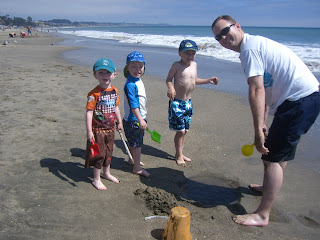 So far this is the depth of the water catching hole. We've got a long way to go boys...keep digging. 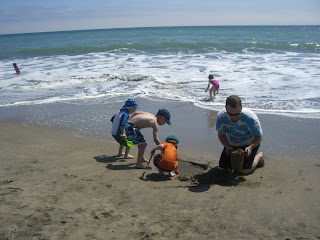 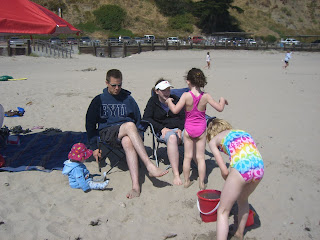 The chair sitters back in the shade of the umbrellas. Notice baby Hunter, 9months in heaven in the sand totally covered in clothes. He later had to return to the blanket when he nose dived into the sand. Poor little guy he just wanted to play in the sand like everyone else. 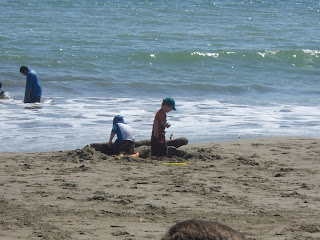 These two munchkins positioned themselves behind this log thinking that they would be safe from the water. Caleb had fallen into the swimming pool earlier in the week and was a little afraid of anything water. They were so funny coming up with their own sings and singing away together. 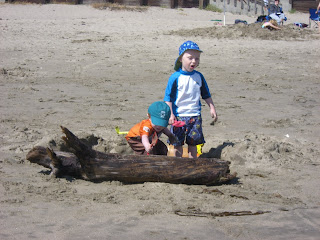 Caleb belting out his own lyrics. 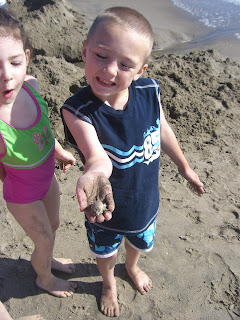 Look what I found mom..a crab! He's so proud of himself, but really he didn't find it some older boys out in the water would bring him the ones that they would catch. He was delighted all the same.


After the real diggers left their pit we took ownership and took turns jumping in and over.
Posted by kathryn at 1:37 PM

Seacliff State Beach:) Love the pictures. Definately going to be telling people to visit your blog to see the post on here, I don't know where my camera was all these places.